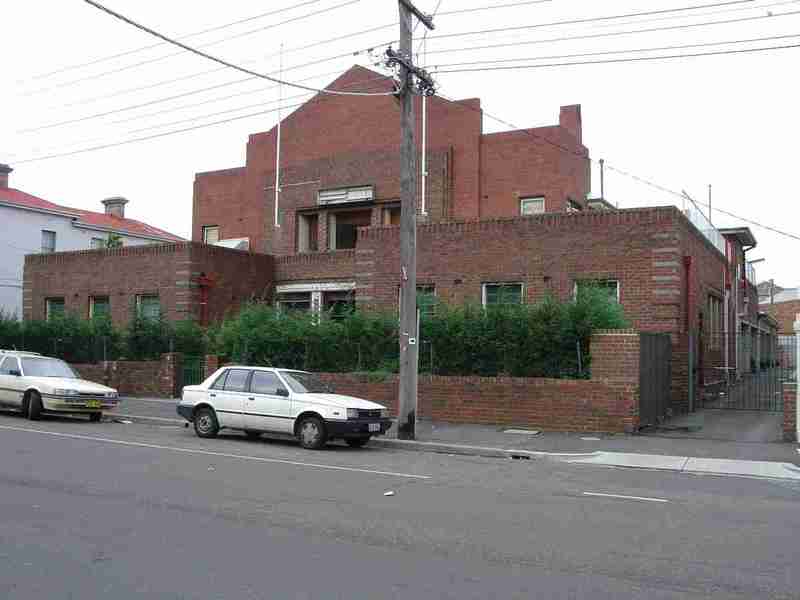 Statement of Significance for the building

The former Drill Hall complex (29/22 Battalion), at 16-26 George Street, Fitzroy, was created in 1936 for the Commonwealth of Australia Defence Department and has historical associations with persons such as those who served in the Australian Infantry 29/22 Battalion. The place has a good integrity to its creation date.

Fabric from the creation date at the Drill Hall complex is locally significant within the City of Yarra, compared to other similar places from a similar era.

The Drill Hall complex at 16-26 George Street, Fitzroy is historically and architecturally significant to the locality of Fitzroy and the City of Yarra.

`This robustly detailed Inter War clinker and red brick building is ... quite a well detailed building .. The building was formerly a hall, though it has recently been sympathetically converted to mufti residential use. The building incorporates single storey pavilions flanking the front entry with rusticated banding, corbelled soldier course parapet capping and mufti paned metal framed windows. The hall itself is a simple gable ended structure employing red and clinker brick in combination. There is a dwarf brick fence along the street frontage.' (Wight 2001)

The first 'suburban' land allotments to be sold outside of the Melbourne town reserve were in the areas now known as Fitzroy, Collingwood, and Richmond. The allotments were numbered 1 to 88. The first 47 made up what was to become the municipality of Richmond, while numbers 48 to 88 covered the area known colloquially in the mid-nineteenth century as the 'district of Collingwood'. These 'Collingwood' allotments lay to the north-east of the City of Melbourne, and covered the area bounded in the west by Nicholson Street, to the east by the Yarra River, to the north by Reilly Street (now Alexandra Parade), and to the south by Victoria Parade (originally called Simpson's Road). The smaller portion of this `Collingwood' area, the land bounded by Nicholson Street, Smith Street, Victoria Parade and Alexandra Parade, became to be known as Fitzroy.(117)

The original allotments in Fitzroy were of varying sizes, most falling between about 12 acres (facing Victoria Parade) and 28 acres, a size suitable for large estates, and small-scale rural or semi-industrial pursuits such as dairy farms, market gardens, and brickyards.(118) Accordingly, land reserved by the Government for roads in the Fitzroy area consisted only of Nicholson Street, Victoria Parade, Alexandra Parade (known variously as Darebin or Reilly Street), Johnston Street and Smith Street.(119) In 1838-39, following the first land sale there were no controls imposed upon the purchasers of land in Fitzroy in terms of the way they could subdivide and resell the land. As land changed hands and was progressively subdivided throughout the 1840s, a peculiar street layout emerged. Though the Government roads provided a framework for a regular pattern of roads which made it easy for speculators to proceed with subdivisions, the lack of controls on the size and orientation of subdivision allotments and the width of roads, together with a general lack of cooperation or coordination between landowners, led to the emergence of an ad-hoc street pattern and layout of allotments in South Fitzroy (120)

The first main non-Government streets to be laid out by landowners in Fitzroy were Brunswick and Gertrude Streets. These two streets became the most important non-Government streets in South Fitzroy, mainly because their original line and length were extended by a number of successive landowners and subdividers. This contrasted strongly with the disparate pattern of subdivision and street layout which developed in other allotments in South Fitzroy.

In 1854, the Victorian Parliament passed a special Act of Parliament, known as the Act for Improvements in Fitz Roy Ward in the City of Melbourne, designed to solve the street alignment problems in South Fitzroy. In the 1850s and 1860s, local politics in the Fitzroy-Collingwood area were concerned largely with the realignment of the worst of these ad hoc streets.

The Act for regulating Buildings and Party Walls, and for preventing mischiefs by fire in the City of Melbourne (1849) (121) came into effect from the beginning of 1850,(122) enforcing fireproof construction and minimum street widths in the City of Melbourne, then including Fitzroy (and excluding Collingwood and Richmond). Under the provisions of the Act wooden or iron buildings could only be constructed with a prescribed set-back from the adjacent buildings and from the street.(123) Without a setback of at least one-third of its height (or eight feet, if the building was less than 24 feet in height), any new building was required to be constructed of brick and/or stone. As a result of the Melbourne Building Act, 1850s Fitzroy buildings were typically 'cement finished bluestone or brick, exposed rough-face bluestone, or exposed brick'.(124) At this time, the influx of gold rush immigrants increased the demand for housing in the fledgling metropolis. The introduction of the Act considerably slowed the rate at which new houses could be built, with the result that supply fell far short of demand. (125) By 1891, only 51% of Collingwood's houses were brick or stone (outside of the Act) while in Fitzroy, the figure had risen to 83% as a direct outcome of the legislation.(126)

The 1860s-1870s was a period of consolidation in Fitzroy's commercial strips, as the rude structures of the early decades were replaced with more substantial premises. This is most apparent along Gertrude and Brunswick Streets, and along Smith Street. The 1870s and 1880s saw the replacement of many earlier single-fronted shop buildings with rows of shops.

The first power driven public transport to be introduced to Fitzroy was the cable tram. One route through Fitzroy ran along Nicholson Street from the city and divided into two routes: one ran along Gertrude Street to Smith Street and the other continued northward along Nicholson Street. Another route ran down Brunswick Street.(127) These routes were established in 1886 and 1887. Unlike the pattern of urban development in some of Melbourne's then outer suburbs, where the location of tram routes facilitated and stimulated the development of those streets into major commercial strips, the tram routes in Fitzroy were located along streets which were already consolidated commercial precincts.

Industry, which had barely existed in Fitzroy in the 1850s had grown considerably by the 1870s and a number of major factories were being built and extended in the 20th century up to the Great War and beyond, including the famous MacRobertson Confectionary factory which started in Argyle Street in the 1880s.(128) The large factories and warehouses from this later period tower above the predominantly low rise nature of the early residential development.

Along with the early development of the suburb and its proximity to Melbourne City, was the development of major institutions on its fringe, in particular, St Vincent's Hospital and The Convent of Mercy (Victorian Heritage Register), both of Roman Catholic origin.

The Convent of Mercy and Academy of Mary Immaculate was founded in 1857 and consists of a number of buildings constructed over a period of thirty years at the corner of Palmer and Nicholson Streets. The complex is significant for its long-term and continuing association with Catholic education in Victoria (129).

St Vincent's was founded in a Victoria Parade terrace house row by the Irish Order, The Sisters of Charity, in 1893; the complex eventually becoming the suburb's largest charitable institution. In 1905 they moved into a new four storey hospital building and by 1914 they were the second busiest hospital in Melbourne, benefiting from support provided by Fitzroy Council, the Fitzroy Football Club and the legendary John Wren. The Healy Wing was opened in 1928 and other wings followed, with the current complex covering a site bounded by Victoria Parade, Nicholson Street, Fitzroy Street and Gertrude Street. (130) A notable recent design was the St Vincent's Private Hospital since added to and altered.

An extraordinary amount of comparatively homogeneous nineteenth century building stock has survived in Fitzroy, as compared to either the City of Melbourne or neighbouring suburbs such as Collingwood or Richmond. Some 22% of the buildings in the Heritage Overlay Area are individually significant compared with, for example, other large residential areas such as 7% for North Fitzroy or 9% for North Carlton. Some 18% of South Fitzroy buildings were erected by the 1860s as a demonstration of its early origins.

The main development period in the South Fitzroy Heritage Overlay Area is that of the Victorian era with a substantial contribution from the Edwardian period. There is also a contribution from some well preserved inter-war buildings and individually significant places of all eras.

The Heritage Overlay Area contributory elements include (but not exclusively) mainly detached and attached Victorian-era and Edwardian-era houses, having typically:

. Pitched gabled or hipped roofs, with many facade parapets,

. One and two storey wall heights but with some isolated landmark 3-5 storey buildings,

. Chimneys of either stucco finish (with moulded caps) or of face matching brickwork with corbelled capping courses;

. Post-supported verandah elements facing the street, set out on two levels as required with cast-iron (typically mid to late Victorian-era ) or timber detailing (typically Edwardian-era or early Victorian-era ) also some use of arcaded masonry verandahs;

. Subdivision pattern that draws from Government surveyed rectangular lots, typically of between about 12 and 28 acres, and then developed privately but within a framework that encouraged continuity of street alignment and allotment size;

. Public infrastructure, expressive of the Victorian and Edwardian-eras such as bluestone pitched road paving, crossings, stone kerbs, and channels, and asphalt paved footpaths;

. Some distinctive rear and side service lanes or rights-of-way, with substantial boundary walls, stable and loft structures, night soil hatches and privies;

. Early institutions such as St Vincent's Hospital and The Convent of Mercy.

. As the earliest urban area outside the Melbourne City grid to be settled in the Melbourne municipality, with several buildings from the mid nineteenth century surviving as testimony to its early establishment;

. For the unusually high number of early Victorian-era and some Regency period buildings, being generally simply detailed and a clear reflection of the early date of Fitzroy's settlement.

. As evidence of early government planning controls or Acts of Parliament, from the 1850s, that aimed to solve street alignment problems in this privately planned suburb, arising from a hitherto lack of co-ordination between neighbouring allotment owners;

. As a good example of the successful application of the Act for Regulating Buildings and Party Walls, and for Preventing Mischiefs by Fire in the City of Melbourne (Melbourne Building Act 1849), which forced the use of fireproof construction and gave South Fitzroy a character distinct from other inner suburbs such as Richmond and Collingwood, that have a greater proportion of Victorian-era timber buildings.

. As a substantially intact collection of predominantly mid to late nineteenth and early twentieth century building stock, interspersed with well preserved inter-war residential, commercial, retail and industrial buildings that contribute to the historical character of the area.

. For the relatively large number of individually significant buildings, being predominantly solid masonry rather than clad with timber, largely as a result of the Melbourne Building Act, 1849

. For the ornate and exuberant detail of many late nineteenth and early twentieth century buildings in the suburb, reflecting the affluence of many of the inhabitants of this area, particularly in the late 19th century.

. For the early street, lane and allotment layouts, some original bluestone kerbs, paving and guttering, and some mature exotic street trees, providing an appropriate setting for this collection of residential, retail, commercial and industrial buildings.

. For the landmark qualities of some large factory and warehouse buildings from the late 19th and earlier 20th century, such as the MacRobertson confectionary complex which are significant features in the skyline of this predominantly low rise suburb; and

. For the major early institutions that developed on its fringes, in particular, St Vincent's Hospital and The Convent of Mercy, as closely linked with the area's history, education and welfare within the metropolitan area.

121 referred to here as the Melbourne Building Act)