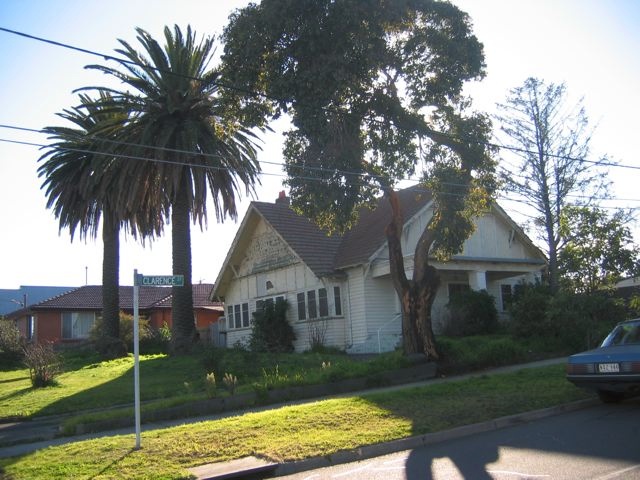 What is significant?
The house at 30 Regent Street, Preston, erected c.1928 Preston is significant. It is a substantial inter-war bungalow with two large intersecting steeply pitched gable roofs, which are clad in terracotta tiles. Its gable ends are clad in shingles and above its windows is half-timbered cladding. Elsewhere the walls are clad in weatherboards. Its windows are grouped in threes and are of a tripartite arrangement with diamond-shaped glazing. The east elevation (Clarence Street) has a timber frame porch, with a flat roof, in front of the house's entrance, which has a pair of timber frame glazed doors. The house is built on a slightly elevated site on the northwest corner of Clarence and Regent Streets. The two mature Canary Island palms (Phoenix Canariensis) also contribute to the significance of the place.

Later alterations and/or additions are not significant.

How is it significant?
The house at 30 Regent Street, Preston is of local historic, architectural and aesthetic significance to Darebin City.

Why is it significant?
Historically, the house is significant as it provides evidence of an important phase of suburban development in Preston during the Inter-war years. (AHC criterion A.4)

Aesthetically, the house is architecturally significant as a relatively substantial and intact example of a Craftsman bungalow that has architectural embellishment and other elements such as the steeply pitched roof that illustrate the development of the 'Australian' bungalow style. The house has aesthetic significance as a result of its slightly elevated position and the two large Canary Island palms, which give it a landmark quality. (AHC criteria D.2, E.1)