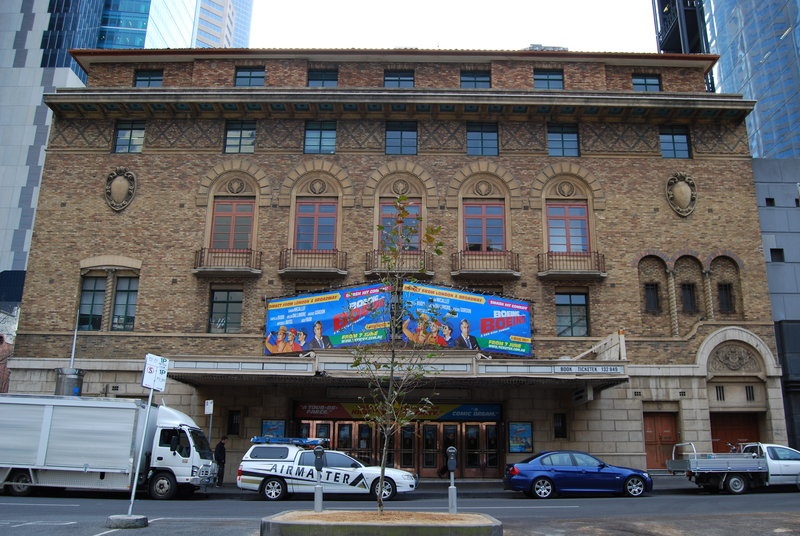 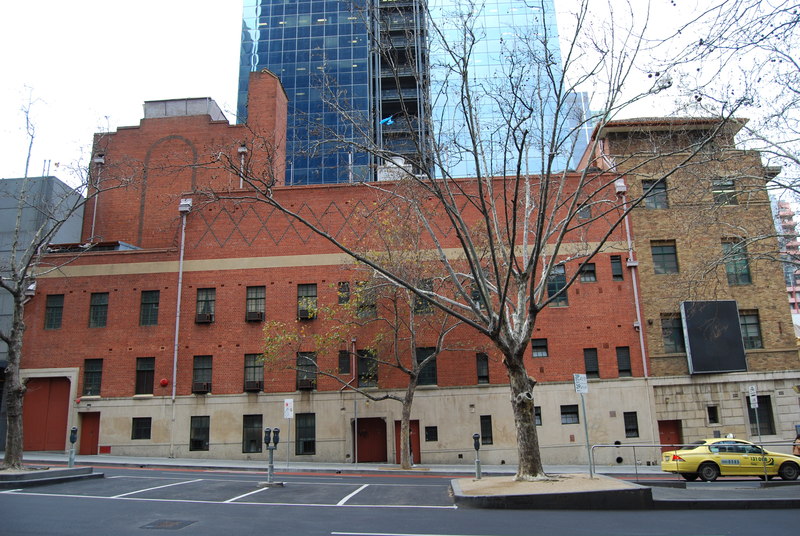 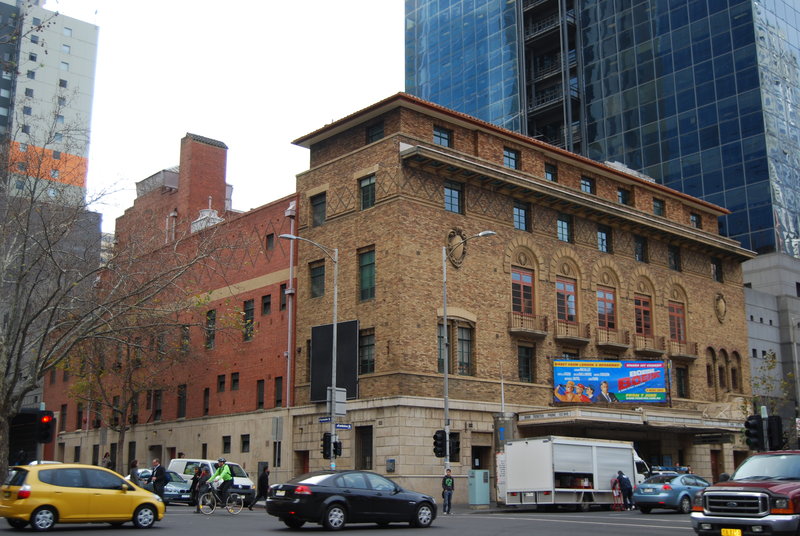 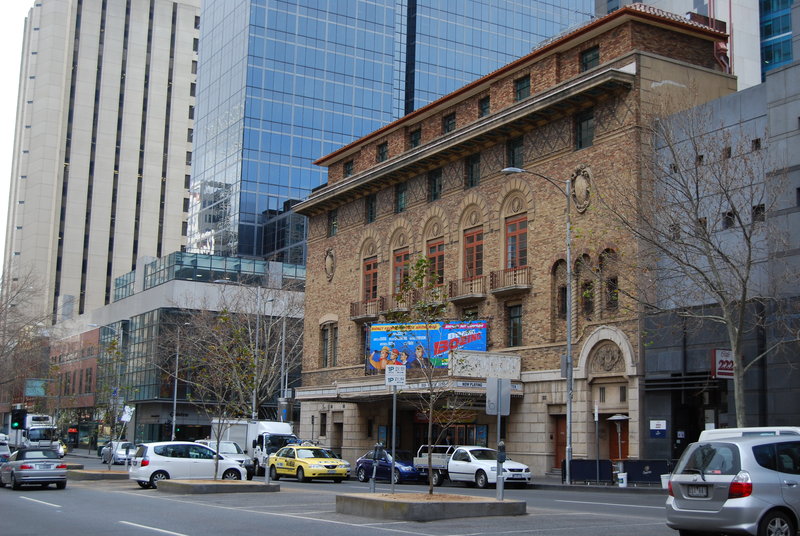 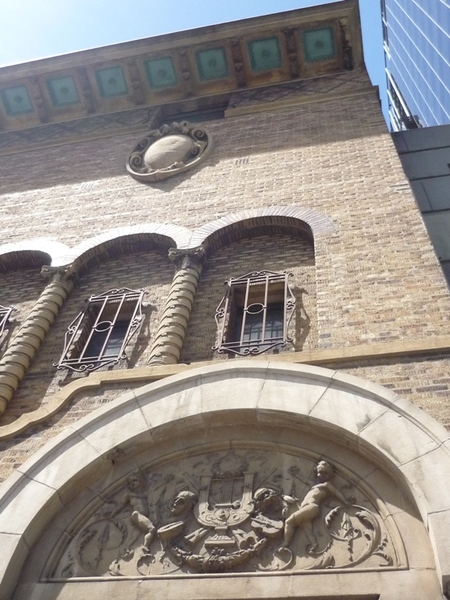 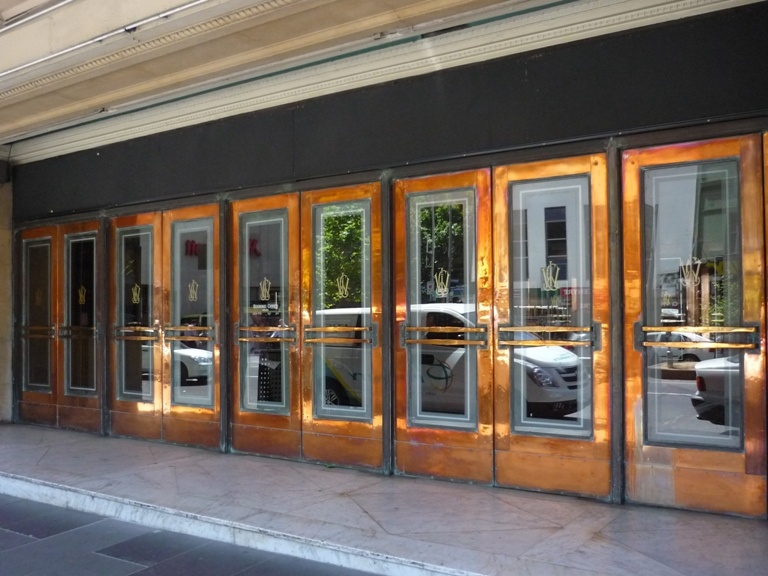 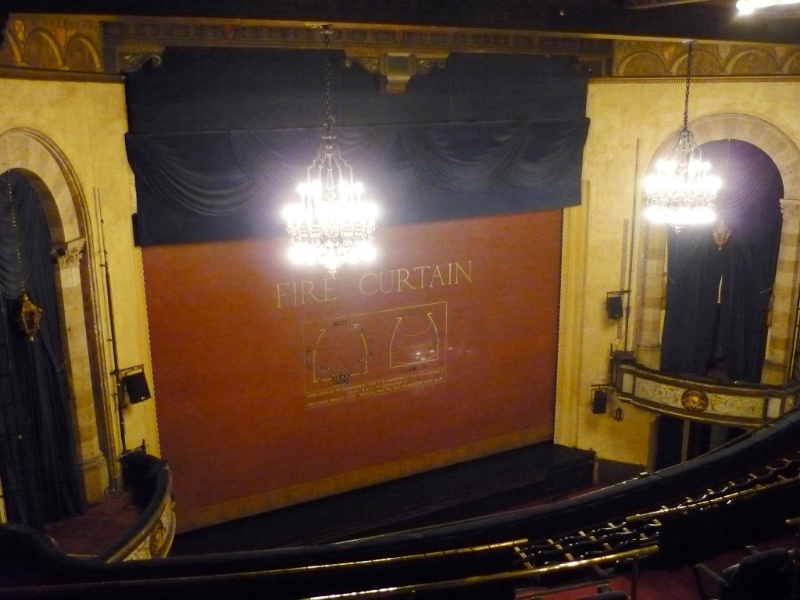 The Comedy Theatre, constructed in 1928, was designed as an 'intimate' theatre for the JC Williamson Ltd. firm of theatre operators.

Theatre manager and actor, James Cassius (J.C.) Williamson, purchased the block of land on the south-east corner of Exhibition and Russell Streets in 1913, shortly before he died. The site had previously been home to a number of Melbourne's early entertainment venues including George Coppin's Olympic Theatre (1855) and the Hippodrome (1880). Though plans were drawn up for a memorial Williamson Theatre in 1913, the site was instead occupied until the mid-1920s by JC Williamson's short-lived film studio and a scenery dock for Her Majesty's Theatre (H0641, 1886) opposite. In 1927, JC Williamson Ltd. commissioned theatre architects Albion Walkley and Charles Neville Hollinshed to design the Comedy Theatre. This new theatre was to be for the production of literary comedies and 'repertory' plays, which would be suited to the 'intimate' scale of the theatre. Its eclectic style, known at the time as Spanish-Renaissance, was intended to convey the more intimate and modern character of the theatre, a contrast to the grand style of the nineteenth century theatre opposite. This style was likely influenced by the Broadway theatre designs of the period by Herbert J. Krapp, the noted American theatre architect. The building also became the administrative headquarters of JC Williamson's Australasian operation, with three levels of offices incorporated into the design.

Upon its opening in April 1928, the Comedy was billed as the 'latest word' in patron comfort, with heating provided throughout the building. It was the first theatre in the country to dispense with the gallery, and instead seated 1008 theatre-goers in the stalls and dress circle. Despite fluctuating success in the 1930s, due to the rise in the popularity of cinema and the Depression, the Comedy continued to stage successful live theatre productions throughout the twentieth century. These included plays by Noël Coward and J.M. Barrie, Ray Lawler's Summer of the Seventeenth Doll and Tennessee Williams' Streetcar named Desire in the 1950s, and the first Melbourne season for entertainer Barry Humphries in 1966. The New Zealand revue troop, the Kiwis, enjoyed record-breaking seasons in the post-World War II years. The Comedy Theatre continues to operate as a live theatre venue.

The Comedy Theatre is a five-storey tapestry brick building, with rusticated render base, of an eclectic style, known at the time of its construction as Spanish-Renaissance. Its facade features cartouches, arched windows with cast-iron balconies and a cantilevered awning fronting Exhibition Street. The doors at the main entrance and in the foyer are of copper with the initials 'JCW' engraved in the glass, and the foyer features imitation travertine walls. The auditorium is decorated with richly coloured beams and brackets, painted arches and coats of arms on the frieze, and gold leaf detailing on the dress circle balcony and box seating balustrading, and a tiled drinking fountain, wrought iron light fittings and panelled ceiling are incorporated into the dress circle foyer.

The Comedy Theatre, Melbourne is of historical and architectural significance to the state of Victoria.

The Comedy Theatre is of architectural significance as an outstanding and intact example of an interwar theatre, which still retains its original design and features both externally and internally. It is important for demonstrating the influence of the Broadway theatres designed by noted American architect, Herbert J. Krapp in the mid-1920s.