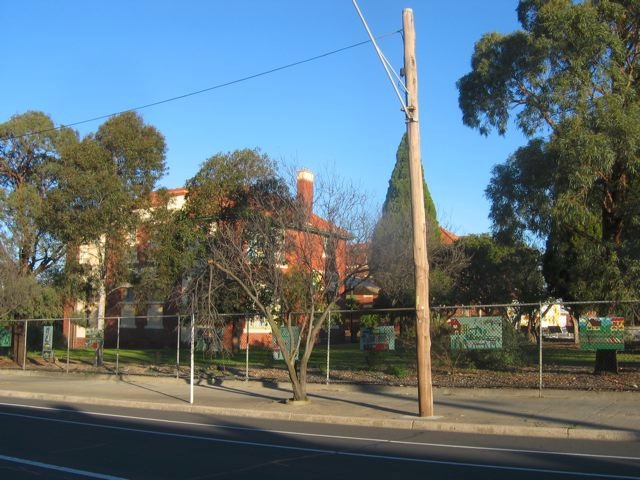 What is significant?
Preston West Primary School No.3885 at 383 Murray Road, West Preston was the third primary school to be built in Preston and catered for the massive growth in enrolments in the wake of the population boom in Preston during the 1920s. The first stage of the school building was erected in 1915, and additions were quickly made as enrolments peaked at over 1000 by 1927. The following elements contribute to the significance of the place:

- the 1915 school building and pre-WWII additions. The design is typical of the Education Department's suburban schools of this period, having face red brick, which is rendered in places, and a hipped terracotta tile roof.
- two timber outbuildings with hip roofs to the rear of the complex.
- mature trees within the school grounds.

Later alterations and additions, other buildings, boundary fences and other non-original/early fabric are not significant.

How is it significant?
Preston West Primary School No.3885 is of local historic, architectural and social significance to Darebin City.

Why is it significant?
Historically, Preston West Primary School No. 3885 is significant as a school associated with an important phase of growth in Preston during the inter-war period, which is reflected in the various additions and alterations made within a decade of its opening in 1915. It is also significant for its association with the history of the local Methodist Church, who used the school to conduct services, prior to the completion of their church, and for its use as a hospital during the influenza outbreak at the end of World War I. The mature plantings in the school yard provide evidence of Arbor Day, an important event in the lives of school children in the early twentieth century. (AHC criteria A.4, D.2, H.1)

Preston West Primary School No. 3885 is architecturally significant as a fine example of an early twentieth century school. Elements of its design, in particular its north (Murray Street) elevation, are unusual and not found on other schools in Darebin (AHC criteria D.2 & F.1).

Socially, Preston West Primary School No. 3885 is significant as an educational facility that has been known, used and valued by the West Preston community for over ninety years (AHC criterion G.1).