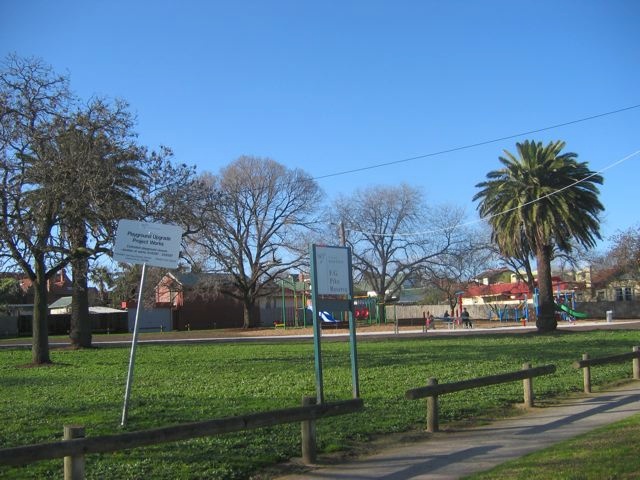 What is significant?
Pike Reserve on Mason Street, Reservoir, an inter-war park acquired in the 1920s, and developed in 1929-30 by curator Mr Eagles who planted shrubs and palms, is significant. The following elements contribute to the significance of the place:

- the form of the park, which comprises mature exotic specimen trees within lawns
- the mature Canary Island Palms, Elm trees and Ash trees
- the position of and use as the children's playground on the eastern side of the park (not fabric)

Later alterations and/or additions, including the fences, the path materials, the furniture and landscaping are not significant.

How is it significant?
Pike Reserve on Mason Street, Reservoir is of local historic and aesthetic significance to Darebin City.

Why is it significant?
Historically, Pike Reserve is significant as one of a group of parks acquired by Preston Council in the 1920s at a time of suburban expansion in order that they fulfil their obligations and satisfy contemporary town planning principles to provide places for public pleasure and recreation, and as a relatively unusual example of its type in Reservoir. (AHC criteria A.4, B.2)

Historically, Pike Reserve is also significant for the representative evidence it provides of the type of works undertaken as a demonstration of civic pride that followed Preston's becoming a city (1926) and recognition of contemporary town planning principles. (AHC criterion D.2)