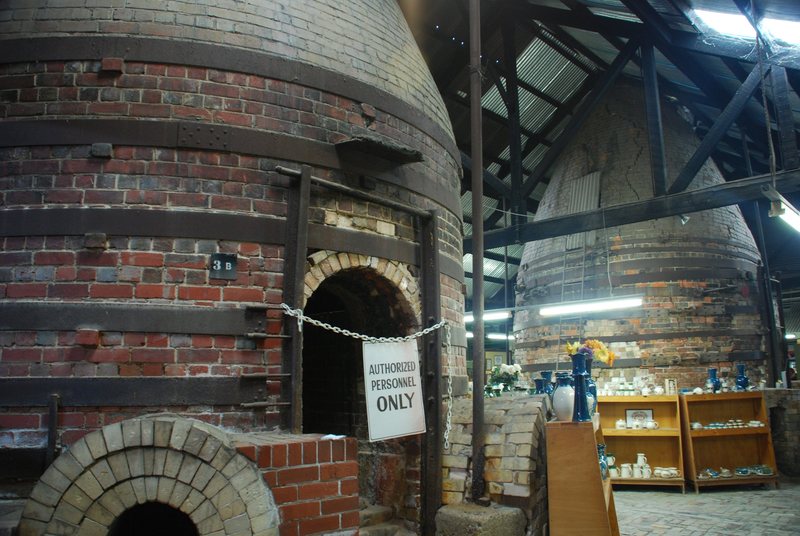 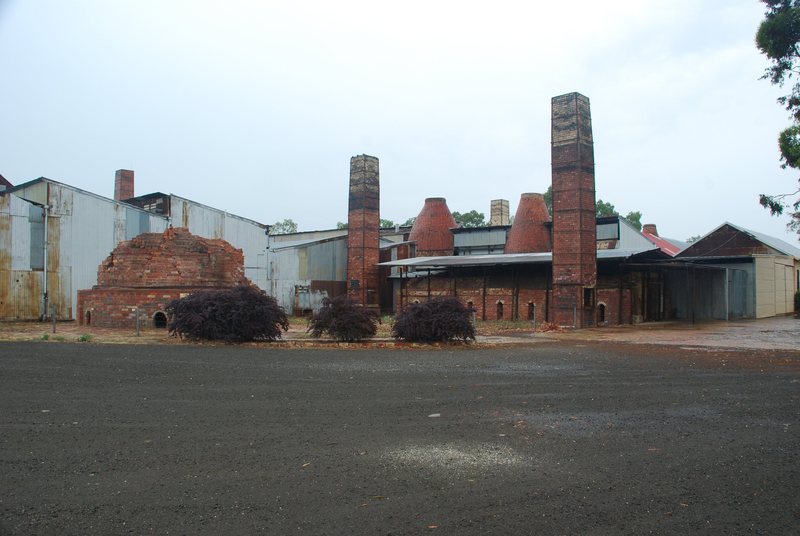 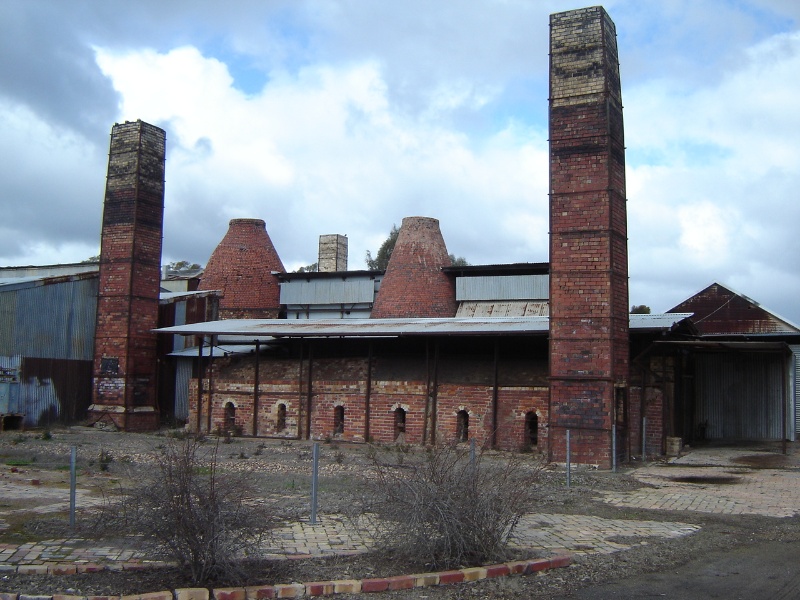 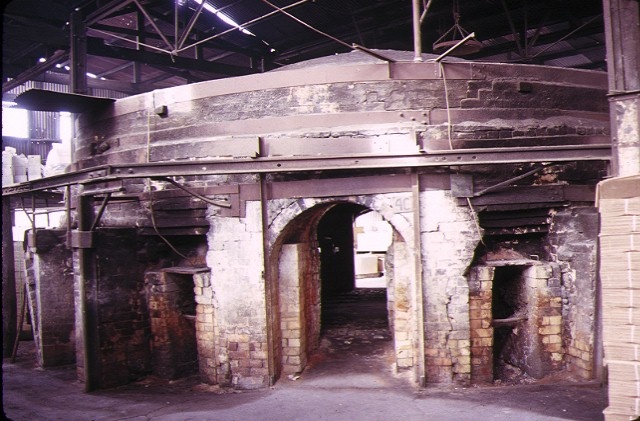 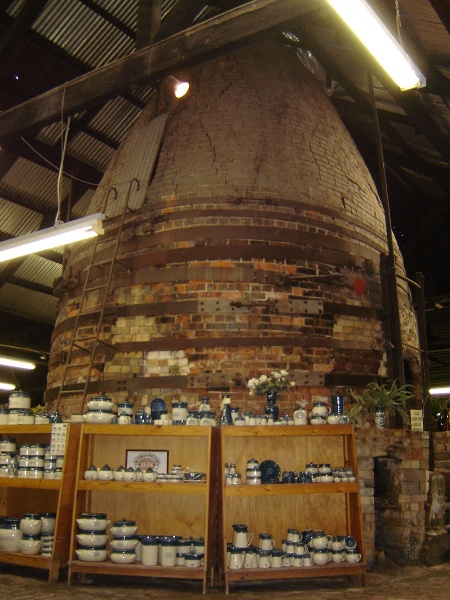 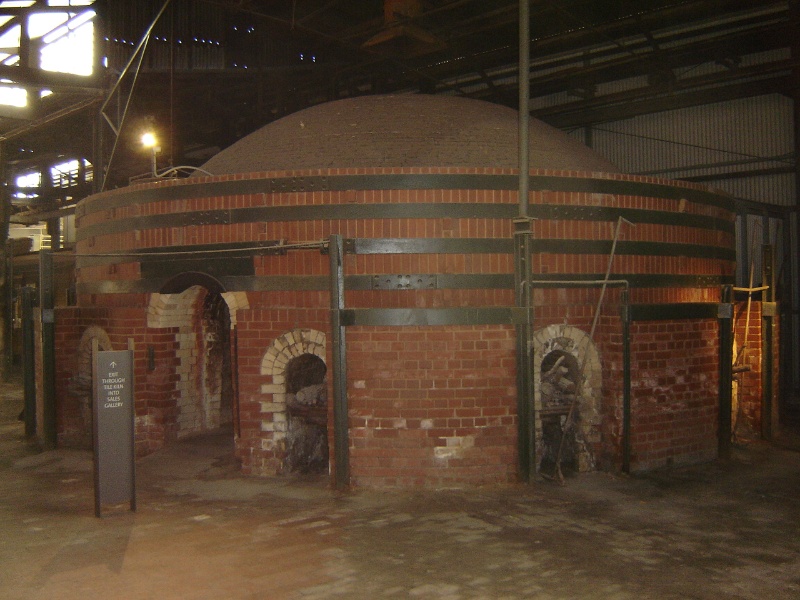 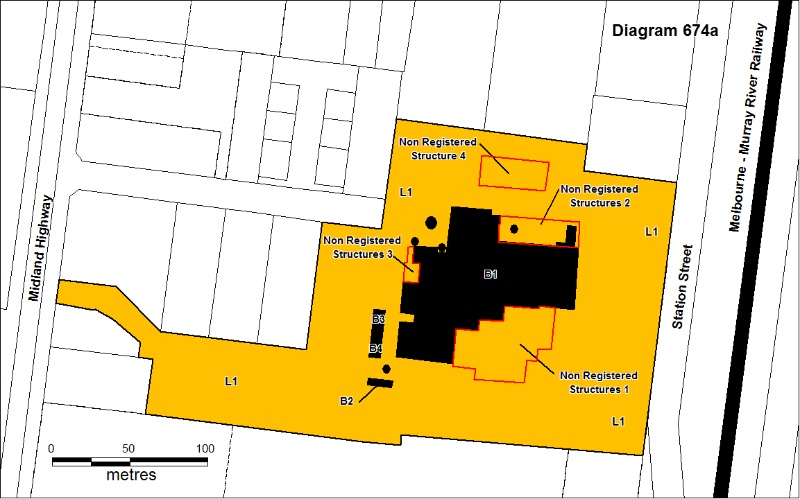 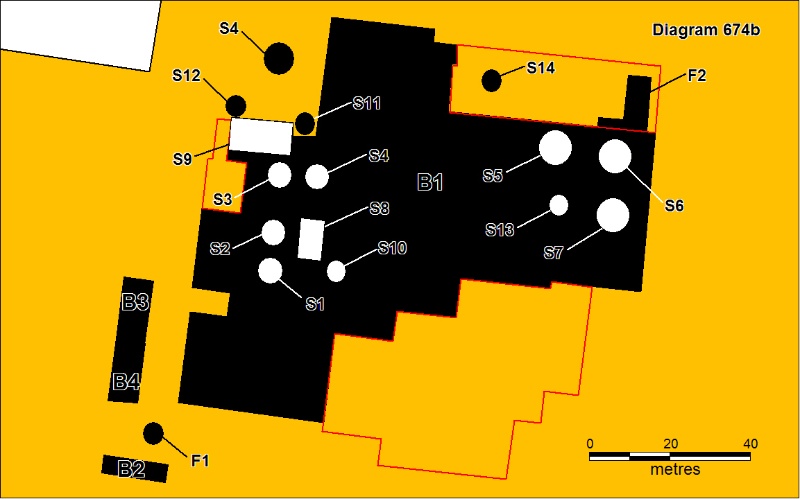 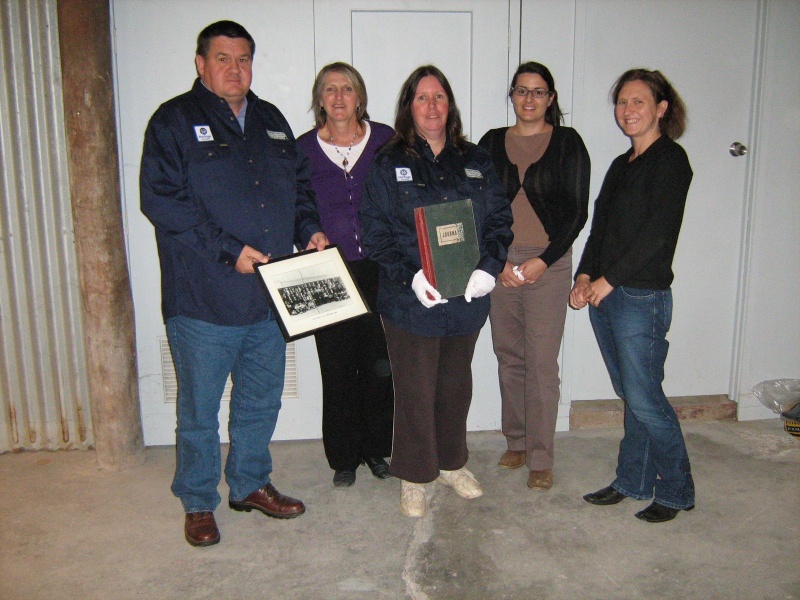 What is significant?
The Bendigo Pottery occupies a large area of land north of Bendigo at Epsom between the Midland Highway and the Bendigo Echuca railway line. The pottery consists of four extant and one collapsed bottle kilns, (built between 1868 and 1943); three circular kilns, (built between 1888 and 1925); and two rectangular kilns, (1932 & 1942) and their associated chimneys; stables, (1873). The site also includes industrial buildings associated with pottery production (1920s to the present), a jib crane (1913) and a remnant Pan mill. These are also a number of other service structures associated with the operation of the works and a collection of smaller structures brought to the site from elsewhere that have no direct link to the site. These include the old Moliagul General Store, a railway box car and the verandah to the former store buildingthat came from the facade of the first Myers store front in Bendigo.

The Bendigo Pottery was established by Scottish entrepreneur George Duncan Guthrie. Guthrie first established a pottery works in 1857 in the Huntly area north of Bendigo where he found good clays, but market difficulties forced its closure shortly after.

In 1864 Guthrie established the current works in Epsom near the previous works. The success of this second enterprise was aided by the new rail-line to Melbourne which had recently opened in 1862 and the establishment of a depot in Melbourne in 1866 to distribute the pottery's products. At the Melbourne Inter-Colonial Exhibition of 1866-67 the pottery was awarded a medal for the range and quality of its product.

Horses were integral to the operation and stables were built in 1873 that could accommodate twenty horses. Horses were primarily used for transporting clay, firewood and finished goods. The stables were designed by Robert Alexander Love who was born and trained in Ireland but spent fourteen years practising in America before arriving in Victoria in 1858. The railway also continued to be of importance to the running of the works and in 1883 the spur line from the nearby Sandhurst to Echuca railway line to the factory was constructed. The construction of the spur line facilitated more efficient handling of finished products and the delivery of high quality clays from other parts of the state.

At the end of the nineteenth century the pottery was producing a vast range of goods that included household goods, a large range of special use bottles, pipes and sanitary ware and a range of pressed decorative ware. From the 1880s the Bendigo Pottery was the largest in the state until it was overtaken by Hoffman's Pottery in Brunswick in the early twentieth century.

Guthrie sold the works in 1882 but continued to manage them for the new owners until his retirement in 1883. Guthrie returned to manage the works in 1886 before retiring again in 1897. Continuing financial difficulties led to the liquidation of the company in 1898. It was repurchased by Guthrie and the Melbourne stockbroker Hartley and trading as G D Guthrie and Company. Guthrie eventually retired for the last time in 1909 due to ill health and died in September 1910. Despite his death the works continued to expand and a Jib crane was constructed in 1913 to assist in the loading and the unloading of railway cars. A new kiln and a new kiln shed were constructed in 1920 and a third pipe kiln was built in 1922.

Over time the works have been modified and rebuilt in response to changes in production methods and products and because of damage from fires, an ongoing hazard in a work place that relies on burning solid fuel. The works have suffered three major fires; 1900, 1923 and 1941. The fires have precipitated major rebuilding of the works.

By 1930 the competition from overseas imports and the depression had forced the pottery to stop the production of household items. They received a boost in 1935-36 with a tender for the supply of sanitation pipework but otherwise struggled financially into the 1950s. By now production was narrowing into pipework, tiling and industrial ware. Humes Pipes subsequently took over the pottery and thereupon followed a further decline. Despite several more changes of ownership, the pottery has continued to operate as a manufacturing, retailing and tourism concern.

How is it significant?
Bendigo Pottery is of technical (scientific), historical and architectural significance to the State of Victoria.

Why is it significant?
The Bendigo Pottery is of technical (scientific) significance for its collection of traditional coal and wood fired kilns. Bendigo Pottery was one of the last large manufacturing concerns where this form of technology was in operation in the late 20th century. The pottery is important for containing in-situ a group of extremely rare bottle kilns. These kilns which date from 1868 are amongst Australia's last surviving examples. Internationally very few of these pottery kilns are known to survive. The Pottery site also contains a number of objects directly relating to the production of pottery and ceramics and includes a remnant Pan mill and kiln furniture.

Bendigo Pottery is of historical significance for its link to the Bendigo Echuca Railway line which is illustrated by the jib crane.

The Bendigo Pottery is of historical significance as a once prominent national industry. The pottery sustained local interests for over 140 years. In that time it produced a wide variety of fine Australian pottery ware. Pieces of Bendigo Pottery ware are included in important Australian public and private collections.

The Bendigo Pottery Stables are of historical significance for demonstrating the importance of horse drawn transport to the industrial processes and transportation associated with the pottery's works.

The Bendigo Pottery Stables are of architectural significance for their association with the architect and civil engineer Robert Alexander Love.

Bendigo Pottery is of architectural significance for its collection of industrial buildings which provide context to the kilns and illustrate the ongoing and changing nature of the works and assist in describing the various pottery production processes. Of particular note are the north facing sawtooth roofs over circular kilns. These appear to have been constructed in this manner to exploit the northern sun to assist with the drying of pottery on drying platforms before being fired