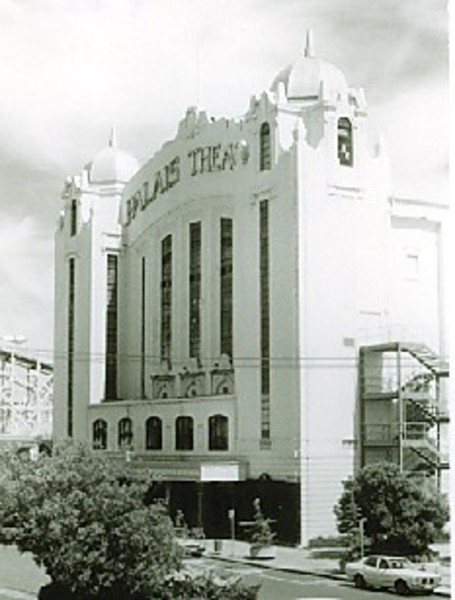 The Sydney Architect, Henry White, designed the Palais Pictures in 1926 and achieved the opening of the theatre in November, 1927. Then, as at the present, the Palais had the largest seating capacity in Australia, possessing over 3,000 seats.
From a simple Islamic flavoured exterior, the style of the Palais moves to a predominently Spanish mode internally with multi-coloured steepled walls and applied plaster decoration in the Adam style.
Notable internal elements include a large Spanish-styled brass chandelier in the entrance lobby; four giant-order scaglioli columns which support the lounge gallery and richly coloured lighting coves, to the ceilings, which take full advantage of the surrounding textured finish.
An unusual aspect of the lounge lobby is the balustraded gallery which overlooks the stalls below; this has been closed in, as has the colonnade at the rear of the stalls.
Other alterations to the building include the enclosure of the balcony on the front of the building, removal of the stage organ, recarpeting and some repainting to ceilings.
Classified: 05/03/1981
Revised: 03/08/1998
2006 National Trust Victorian Heritage Icon Award (People's Choice)