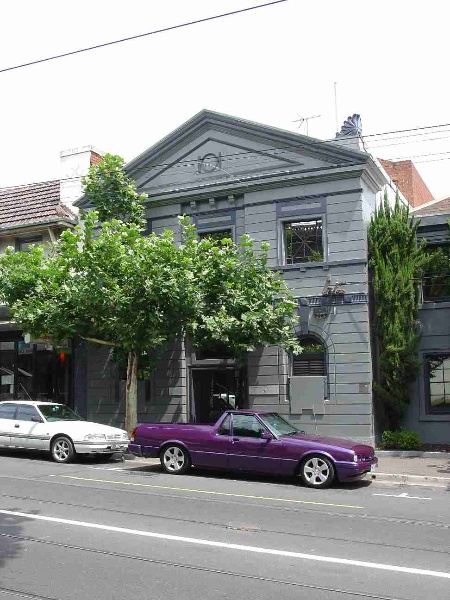 Swan Street was designated as a road reserve in Hoddle's Crown survey of 1837. The north side of Swan Street within the heritage overlay includes parts of Crown Portions 20 (granted to C Williams), portions 21, 22 (granted to Rev J Docker) and 23 (granted to J McNall), all sold 1839. By 1853, much of Docker's and Williams' land had been subdivided: Wangaratta, Lennox, Stanley, Clifton, Docker and Charles Streets had all been laid out. The precinct also includes parts of Crown Allotments Nos. 1-8, stretching south to the river and sold in 1849. The Whitehorse Hotel (250 Swan St ) was built on one of these portions between 1849 and 1855. By 1857 traders in Swan Street included butchers, drapers, fruiterers, tailors, shoemakers, hairdressers and hoteliers, including the Swan Inn, Dover and Royal Hotels by 1858. (131) Swan Street was fully developed by 1889 and the roadway was sealed or macadamised in 1901.

The Swan Street area was first served by public transport after the Melbourne and Suburban Railway Co. was authorised to build a line from Princes Bridge Station to Windsor, with a proposed branch line through Richmond to Hawthorn open as far as Punt Road in 1859. The line was later relocated to off Swan Street, serving Richmond Station. The extension from Punt Road to Church Street (now East Richmond Station) and Picnic Station (between Burnley and Hawthorn) opened in 1860, serving the pleasure grounds at Richmond Park (now Burnley Park). The line to Cremorne Station (south of Richmond, near the Yarra) opened 1859 (132) and the level crossing across Swan Street was replaced by an overhead bridge in 1887.(133)

While Victoria Street and Bridge Road had been served by cable trams since the mid-1880s, the electric tram service in Swan Street, which duplicated the nearby railway, was established in 1916.(134) Swan Street itself originally terminated at the Survey Paddock (later Richmond Park, now Burnley Park), but was extended to the Yarra River between 1874 and 1888. The introduction of electric trams to Swan St also encouraged further development.

Dimelow and Gaylard's original store in Swan Street Richmond was burnt out in 1906, and in 1907, a new store was built by Robert McDonald and the architects were HW & FB Tompkins. It was renamed 'Dimmey's Model Stores' in 1912. The distinctive clock tower, which is topped with a copper ball, was added between 1908 and 1916.

Some 24% of the buildings identified along Swan St are from the early Victorian-era and nearly 26% are individually significant, being a high percentage among other Heritage Overlay Areas but typical for the City's old commercial strips, with Brunswick St being 21%, Smith Street 27%, Queens Parade at 33%. Individually significant buildings identified range from the 1880s-1920.

The main development period of the Swan Street Heritage Overlay Area is that of the Victorian and Edwardian-era, with a contribution from well-preserved inter-war buildings and individually significant buildings from any period.

Contributory elements include (but not exclusively) typically attached Victorian-era and Edwardian-era mainly two-storey shops and residences having typically:

. Facade parapets, with pitched roofs behind

. No front or side setbacks;

. Chimneys of either stucco finish (with moulded caps) or of face red brickwork with corbelled capping courses;

. Post-supported street verandahs as shown on the MMBW Detail Plans (135),

. Less than 40% of the street upper wall face comprised with openings such as windows;

. Red brick, storage or stable buildings at the rear or side lane frontage for some properties;

. Public infrastructure, expressive of the Victorian and Edwardian-eras such as bluestone pitched road paving, crossings, stone kerbs, and channels, and asphalt paved footpaths

. As one of the two major early commercial thoroughfares in the former City of Richmond, with a good collection of well-preserved, mainly Victorian and Edwardian commercial buildings, containing a mixture of shops, hotels and other commercial buildings, many of which are substantially intact at first floor level, with a number of historic shopfronts at ground floor, including those dating from the interwar period;

. For the landmark or individually significant buildings from all eras including early hotels, from the gold rush era, and famous retail stores such as Maples, Dimmey's and Ball and Company, many with architecturally significant upper facades; and

. As a good illustration of commercial architectural styles in the City, from the late 1850s to the inter-war period.